SOPA has over 60 membership organisations including community groups, national campaigns and organisations, equality and minority groups and lifelong learning associations along with 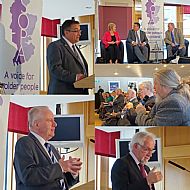 individual members. The combined reach of these members is estimated to be 40,000 older people across Scotland, many of whom are affected by ill-health, come from disadvantaged and diverse backgrounds, and who often feel excluded from decision making.

SOPA aims to enable and empower members to use their experience and skills to influence policy decisions that affect later life. Members are encouraged to feedback from national groups and forums to their wider networks of older people, creating a powerful network of engagement.

Since 2009 SOPA has delivered nine national assemblies and over 60 local meetings enabling us to influence decision makers on issues important to older people, including funeral and fuel poverty, housing, transport, health and social care, active ageing, human rights and many other topics.

Members are frequently invited to participate in consultation and engagement activities by the Scottish Government, Scottish Parliament and other national and local bodies.

A Scotland where Older People are recognised as a vital part of our society with opinions, thoughts, ideas and solutions to help create an equal and socially just society.

The Scottish Older People's Assembly exists to give a strong voice to Older People about their experience of life in Scotland, the challenges they face and concerns they have, and to celebrate the positive contribution that Older People make to society.

Read the SOPA Constitution - this document was agreed by OSCR in April 2016. SOPA is a registered charity (SCO46520).