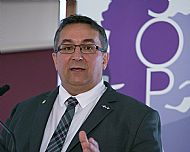 Christian Allard, sponsor of the 2015 Assembly SNP, lodged the motion below on 7th October -