WASPI in Edinburgh: In 2013 Age Scotland ran four regional assemblies with several attendees going on camera to express their concerns. From this edited footage, SOPA made a number of short films, including 'Money Matters' in which older women talked about their pension concerns. Now a UK-wide campaign group has formed called Women Against State Pension Inequality (www.waspi.co.uk/). It is making waves against the unfairness of pension changes for women born in the 1950s. Read Telegraph article - '500,000 deserve a better state pension deal'. 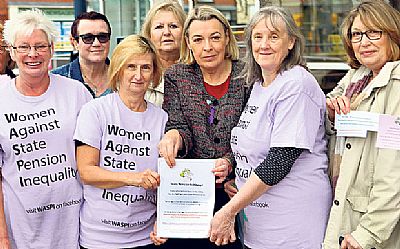 Many women will be getting a letter from the DWP soon. Please respond before 20th August as WASPI would like to have a mass mailing of replies. See the Action Page on their website for letter template. Local groups in Scotland include Glasgow and Lanarkshire, Edinburgh and Falkirk. The Edinburgh East group has an inaugural meeting next week on Tuesday 23 August, Portobello Library, Rosefield Avenue, Edinburgh at 6:30pm. Spread the word and email Andrea Gregory if you are coming.