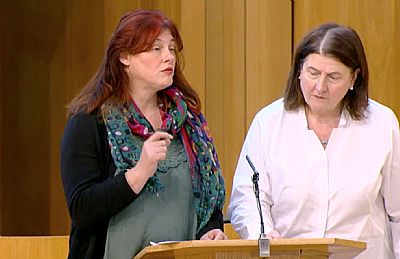 This issue first arose at the 2014 SOPA Assembly, and was again highlighted at the 2015 Assembly. SOPA subsequently has supported the 'Age in Mind' project led by the Scottish Mental Health Co-operative (part of 'See Me' programme aimed at ending mental health stigma and discrimination.)  It has affirmed that once people hit 65 they have less access to psychiatrists and specialist nurses, and worry about losing places at mental health support services. Angela Dias and Helena Scott (from Action in Mind, Stirling - above) amplified this issue in their presentation at the 2016 Scottish Older People's Assembly in November.  Last week they brought older people from the 'Age in Mind' project to a reception in the Scottish Parliament to speak out about their treatment or lack of it. See also Third Force News link below.